To begin, please tell us a little about your work.

My work tends to revolve around the absurdity of everyday life and the comical interpretations that can arise from such occurrences. It’s very important for me that what I am trying to express speaks directly to the viewer, so the aesthetic of the image is vital, the image has to be immediately felt, rather than conceptually decoded.

What pictures do you have pinned up above your desk or in your studio that inspire you?

I tend to get sick of images fairly quickly, with the need to replace them all the time. My visual inspiration is also not restricted to photography, but anything with an aesthetic implication. At the moment there is a selection of 3D hyperreal GIFs on my desktop, a sculpture of a wooden penis I permanently borrowed from my parents place, and an image from Wolgang Tillmans entitled ‘Headlight’ from his latest book Neue Welt, which I fall increasingly in love with the more I look at it. 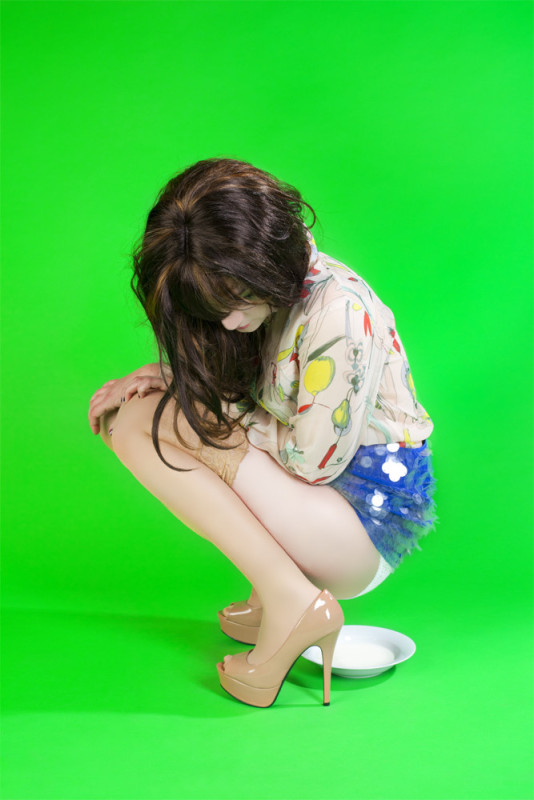 Where are you from originally and what is your relationship to London?

I am originally from Australia, however I came to London when I was 16, then moved on to Israel, then Holland, and now I am back  here, so I have a tangled relationship with London. Having travelled so much, I think I will always view London as somewhere I am very comfortable with, however I will always be a foreigner. This simultaneously allows me to view London as both an insider and outsider, with all it’s complexity and nuances. It is a constant push/pull relationship.

Whilst your work is rooted in photography, what is your relationship to other mediums, be they painting, video or literature?

The exciting thing about the current digital culture, is that different mediums have the possibility to interact with each other in collaborative and immediate ways. The distinction between different mediums is collapsing, allowing the concept to prevail above the form. Personally I find a lot of inspiration in literature and music, as they are non-visual, and consequently I find it easier to form independent visual ideas. I have just finished reading White Noise by Don Delillo which blew my mind!

What other practitioners are you most excited to be showing alongside?

There are so many exciting artists involved, I am a big fan of Penelope Umbrico, Esther Teichmann and Claire Strand, and I am also excited to see Luke Norman & Nik Adam’s work. I really appreciate their constant ability to change their perspective, not getting complacent in one single form of visual representation.

Without giving the game away, what will you be showing at the Night Contact festival?

‘When We Meet Again, It Won’t Be Me’ is a series of short moving images, exploring the visual noise and data mutations that flood our image consumption. Through a series of broken narratives, devoid of any satisfying meaning, the cohesive unity of the symbolic gestures presented is continually evaded. The work oscillates between the glossy perfection of digital commercial imagery, and the subversive undertone that lies within it.

Who do you feel are the most influential figures within photography today?

I think the individual voice has less of an influential impact than it once did. With the ease of digital communication and collaboration, the quantity of imagery produced, is more important than the individual perspective. Saying that, Wolfgang Tillman’s latest series Neue Welt is just wonderful, as is the diverse work of Vivianne Sassen. Tillmans’ series is so all encompassing in it’s fragmentation, however there is a quiet thoughtfulness to each image. I find this allows for such a vast perspective of the contemporary world to be digested, without it being overwhelming.

What would you hope that festivals such as Night Contact ultimately achieve?

I think Night Contact is a fantastic opportunity to open up a dialog about the possibilities of the photographic and it’s potential for expansion. The projection of such a diverse range of works within a public sphere, adds another dimension not only to the works themselves, but also the surrounding environment. 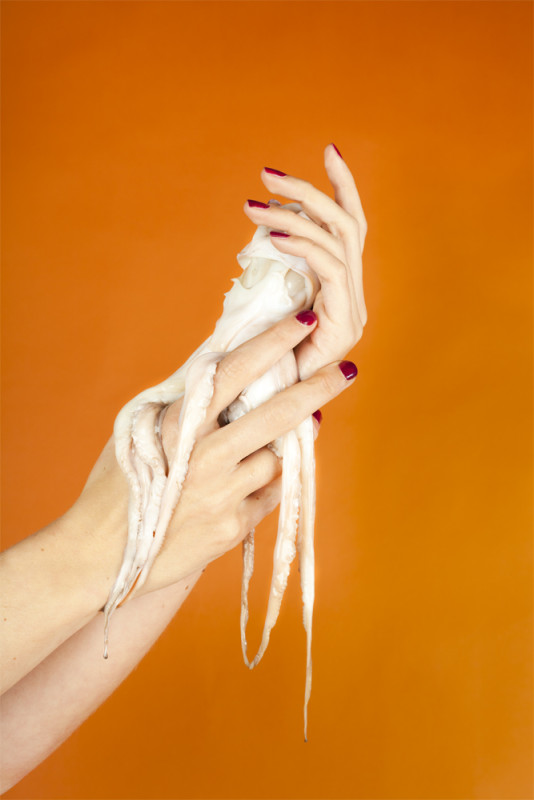 What are you working on at the moment? How much can you tell us about it?

I am currently working on a new body of work entitled ‘Black Tropicana’ with my photographic other half Chloe Newman. The series will be exhibited in A Tribute Act Exhibition on the 3rd and 4th of October at Trinity Buoy Wharf, London. The work explores the notion of absolute perfection and plasticity. We were originally inspired by the hyper reality of artificial worlds, 70’s glam disco and the superficiality that can exist within pop-culture. From that, we have attempted to create an the ir-real façade, critiquing a paradise devoid of the essence that makes it ideal. It is exciting as this is our first collaboration together, however it has been such a blast, we will definitely be continuing our mutual obsession for night neon disco madness!

What do you think are the most interesting or important conversations occurring within photography today?

I am currently really interested in the fragmentation of information through the use of technology, and how the photographic is implicated in this disruption to a cohesive whole. It is a topic that can be directly felt on a daily basis, and one that I still don’t fully understand, as it’s happening so quickly, there is hardly time to grasp it. I am also fascinated by photography’s inherent indexicality, and how far this can be disrupted or manipulated. It really allows an endless possibility of mischievous deceit!